Creating a Business Plan and a Mom Plan…by Jennifer Probst Photo by Arnel Hasanovic on Unsplash

If we run a business, most of us have created a business plans.

I found this critical as my business grew, and I wrote new books, and took on a team to help make me successful. I try and tweak it each year, and sometimes sooner if I feel like I’ve begun to wander aimlessly in the thicket of woods that is called life.

Then I began to question something.

Why don’t we have motherhood battle plans? Five year? Two year? Hell, how about a six month plan?

Is it because we are raising tiny humans who have the ability to consistently surprise us, cause pain, unending joy, and scare the crap out of us?

But I was walking the dog and thinking about my new business plan for 2020 and then I was thinking how damn proud I was of my boys. The things they are accomplishing humble me. From running cross country and working hard with their training and practice. To one going to the spelling bee and studying every night because if he failed he wanted to know he’d tried his damn best. To the oldest going to sing at Radio City Music Hall, all dressed up in a suit with a cummerbund ** a bright red one and bowtie** and he’s taller than me now and I got a flashback of what this was going to be like one day when he gets married. He wasn’t even nervous. He just said they’d practiced and they’d do great and there were over a thousand people in that sold out crowd and he just sang his heart out with his group and had a blast doing it. He knows how to SAVOR life. How did he get like this?

Sure, I’m positive I had something to do with it but not all. I know plenty of kick ass parents who just have kids who struggle. It’s a personality. Sometimes a mental illness. Sometimes just plain awful bad luck.

Hell, I could be here writing a blog in five years and talking about how my amazing boys have gone off the path and I’m crying every night trying to deal with it.

Life’s funny that way. The Unexpected.

So back to my motherhood business plan, wouldn’t it be amazing if we could plot out some tools or goals to accomplish with our children?

As a writer, I use a staff of people, a planner, and a budget. What if I could take all these things and apply it to being a better Mom – or the Mom I’d like to be?

After all, I’ve experienced more epic mom fails than I have successes. Looking back, these are some things I’d like to change:

The time I lost my shit and told my son I was going to burn his favorite stuffed rabbit. I know. I should go to hell for this one. I still may.

All the tight shoes and short pants I made my boys wore throughout the years, including Pajama Day and Picture Day and Concert Day.

They eat tons of desserts and my mother is always warning me they’re gonna get the diabetes because they don’t eat enough healthy things.

I let them stay up too late and on weekends and summer there is no bed time.

I should make them eat a more varied diet like so many other children. My son went to a banquet buffet and when I asked him what he ate, he told me two rolls and dessert. I wanted to cry.

My kids know every fast food and chain restaurant known to man, and argue about which ones are the best. When I was growing up, eating out was an occasional splurge other than pizza.

I buy them pretty much what they want because they’re so damn good and rarely ask for stuff so when they do ask, I buy. Because it makes ME feel good.

I don’t make them do enough chores. I just do it for them.

I tell them they’re not allowed to marry anyone I don’t like.

I tell them they can’t move away from me and leave me alone with my husband.

Okay, so listen, this is not a blog post -it’s a BOOK that’s how many fails I have.

But then when there’s a success, I don’t want to gloss over it too easily either. I earned these successes by showing up every day and being a Mom. I want to revel in all of this stuff and feel like a Superwoman. Look at my boys! Aren’t they amazing? Aren’t I the best mom EVER?

So, why can’t I? If the bad outweighs the good, what’s wrong with puffing up with pride and savoring every moment of sweet victory?

And why don’t I ever do this with my writing? It’s a struggle there, too. I get a dozen five-star reviews and raves. I get one review that says she didn’t like my book, and suddenly I’m in the toilet, realizing I suck as a writer – that I am a FAILURE over one stupid, lousy, comment. Why do I do this to myself?

My upcoming year I’m going to put steps in to changing some of that. I may not succeed completely, but even if I improve, I’ll be ahead of the game. I’m celebrating more – on the personal and work front. Why are women so trained to think of relishing each success as ego? Why are we so afraid to look like we’re bragging? Why do we think humble means not saying anything at all, keeping our head down, and just hoping for our piece of the pie?

The hell with that. I’m taking it for myself. In fact, I’ve been training for this most of my life, as I aged and realized if I don’t speak up, no one will on my behalf. And that I can be kind, and humble, but still proud and roar like a lioness.

I’m also going to make a Mommy Plan. It will be a good education to really think over what I feel is important I bring to my children as a parent. Why not go about being a mom as a thoughtful, individualized goal plan?

Here’s a rough draft of what mine looks like.

Talk to my boys about sex and EMOTION. Relationships with girls and how best to communicate and keep true to themselves. To speak up against anything they see if they’re at a party, or in the hallways, and if either sees someone they think may be in trouble—don’t walk away. Do something.

Play more games with them – especially board games.

Take each of my sons on a personal one on one date to spend time together and do what they each like. We spend a lot of time together but I think I need more individual, thoughtful time.

Volunteer for something together to do as a family.

Work on limiting their desserts at night.

That’s it for now. Small, honed-in steps to make us all better and grow together.

I’m excited for my future writing career as 2020 unfolds and the projects I plan to undertake.

I’m excited to be a Mom and watch my boys grow and change, and I want to be a healthy part of it.

Are you making a business plan, personal plan, or Mom plan? Don’t wait for New Year’s. As darkness falls and holidays slowly crawl in, I think it’s a great time to take stock and do some restock.

PS: I have a new book out today – Something Just Like This. It’s a sexy political romance without the politics and I hope you love it! Just go ahead and click on the HOME page and BUY. It’s good. Really, really good. 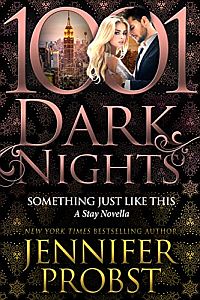