Happy August everyone!
I have been a very bad writer lately. Seems the lazy days of summer have caught up with me, and I’m worse than my children!
Besides sleeping late every morning, I’m constantly on the run with the kids. Sometimes I complain. Most often I don’t, because pool parties, beaches, libraries, parks, etc are FUN. Vacations are FUN.
And I’ll be paying for it big time in September anyway!
One thought to leave you with. If you’re wracked with guilt about word count, or not getting as much done as you had hoped, remember that as writers one of the most important things we need to do is LIVE. Refill the well. Experience life outside the office.
I strolled the beach and daydreamed stories. I’ve eavesdropped on tons of conversations and been inspired. I’ve felt the sun on my face and my children’s laughter drifting to my ears and felt happy. This is just as critical as writing the words.
On that lingering note, I’d like to offer you the first five pages of Dante’s Fire for your enjoyment. Thank you for helping me spread the word on this new novella, and please continue to add to your Goodreads list of books to read – if I get another 500 adds I’ll release another five pages!
Enjoy! DANTE Stark lifted his hands and pressed palms flat against the windowpane. Trees bent to the will of the storm, and the sky remained dark and unfriendly overhead. Rain streamed down in misty rivulets, pattering the glass. The chill soothed the sting of his skin, but he was used to the burn and barely felt the discomfort anymore.

Of course, it had barely begun. A few dates. The promise of something more. Her smile was sweet, her demeanor gentle, but after a few evenings of him disappearing with no explanation, the foundation was already beginning to crumble. She stared at him with wariness now, the slight frown marring her brow as if she now greeted a stranger.

And she did. Because the half-truths he had to tell to keep his secret always got in the way. It seemed everything in his life was both a blessing and curse—the women he began to care for turned suspicious and pulled back. It was the price he had to pay to keep the dark legacy that some might see as a gift. Perhaps, it was. But right now, it didn’t feel that way.
Dante dragged in a breath and leaned his forehead against the smooth glass. He couldn’t do this to himself any longer. Or to them. He needed to accept the truth about his destiny.

He would always be alone.

It was safer. Kinder. No more hurt or false promises. No more lies. Loneliness, yes. But loneliness he’d always been able to handle.

He clenched his fists, refusing to wince at the soreness. This time, he’d do things differently. Inferno Enterprises was close to opening, and he’d planned to take a CEO position, hoping to bury himself in the blessed void of hard work. But his instincts warned him the move could be dangerous. He’d be in the spotlight, and would need to be involved in constant meetings, travel, and deal with the press. If he wanted his secret to remain safe, he had to stay on the sidelines. A place where he wouldn’t be noticed, yet able to keep an eye on everything.
A humorless laugh escaped his lips. He was about to launch a billion dollar Property Empire and couldn’t even claim it as his. God, life was cruel.

The mocking voice behind him made him groan. “I’m not in the mood, Chase. Leave me alone. How the hell did you get in here anyway?”

“My extra key. I sensed you needed an intervention.”

Chase chuckled. “So you can cry against the window and rage about your fate in life? You disappoint me.”

Dante lifted his head. Damn. “Even you can’t deny me a few minutes of misery. Not only did I fail at another attempted relationship, but I’ve got to hand my newest corporation over to you.”
Chase studied him from the shadows. His friend was the only one who knew about his secret, and the only person in the world Dante trusted. They’d been working together for years, with Chase taking the lead as the face of the company while Dante was able to stay in the background. Most of the executives and financiers only knew Dante as a name on paper, but Chase was the main contact.

“Sara was never right for you,” Chase said. “You need a woman with some fire.” Dante raised a brow and his friend laughed. “Sorry for the metaphor.”

“You always sucked at creativity.”

“Not my forte. I’m better being the Alfred to your Batman.”

Dante laughed and turned from the window. “You’ve never cooked or cleaned in your life.”

“True. And you don’t have any cool machinery either. Kinda boring. But at least I’ll get to play with Inferno. I’ve already got my eye on some of the hotties we hired.”

Dante shook his head. “Work and play don’t mix, and we both know it. Keep to the clubs you like to frequent.” With his streaky blonde hair, light blue eyes, and smooth charm, Chase was a magnet to women and enjoyed them all. Many times in multiple pairings. His sexual escapades were widely known and he never lacked for partners. Dante envied his freedom and ability not to care.

“You’re no fun. I’m the symbol of discreetness. Maybe if you got laid more often you wouldn’t try to ruin my happiness. And theirs.”

“Maybe if you didn’t get laid so much you’d have a better shot at holding down a real relationship.”

Mock hurt carved out his elegant features. “I have real relationships. They begin each evening and end at dawn. Besides, it would be selfish to limit myself to one woman. Too many would miss out on the incredible opportunity for multiple orgasms.”

Dante grinned. “Why do I bother? Just concentrate on getting Inferno launched successfully.”

“Of course. Is my office cool?”

“Yes. A wet bar, exercise room, and a private bedroom. Mahogany desk, like you requested.”

“Excellent. While I’m enjoying the benefits of CEO stardom, where will you be?”

Dante rubbed his forehead. There was only one place he could assume a role where he knew everyone, everything, and was still invisible. “The mailroom.”

Silence fell. Then Chase burst into laughter. “Oh, this is too good. You’ll be delivering mail while I’m in the executive suite. This is poetic. You really are a fucking superhero.”

“Screw you. I’m still the owner and your boss. Now get your ass to work and out of my apartment.”

Chase was still laughing when Dante walked away. Maybe it was better this way. He’d lay low, be the eyes and ears of Inferno, and not have to worry about any mysterious disappearances or suspicious questions.

Yes. It was better to be alone.

WANT MORE? CLICK HERE TO ADD TO YOUR GOODREADS LIST AND ENTER TO WIN A FREE BOOK!

One thought on “Sneak Peek at Dante’s Fire!” 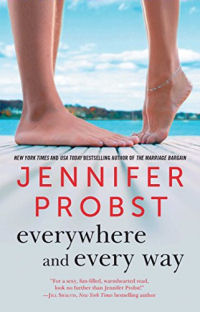 Jennifer Probst is giving away a signed copy of EVERYWHERE AND EVERY WAY.